Cooperation Beyond Closed Networks Does Not Come Easy to Successful Businessmen

RONALD BURT AND SONJA OPPER FOUND EVIDENCE THAT BUSINESS LEADERS IN MORE CLOSED NETWORKS ARE LESS LIKELY TO COOPERATE BEYOND THEIR NETWORK, ESPECIALLY WHEN THEY RUN SUCCESSFUL BUSINESSES

A closed network paired with business success, even when they are not causally related, can lead entrepreneurs to distrust people outside their network, to avoid cooperation and, consequently, to miss opportunities to develop new business ideas and to create value, according to evidence collected in China by two professors of Bocconi Department of Management and Technology: Ronald Burt, Senior Professor of Social Network Studies, and Sonja Opper, Full Professor of New Institutional Economics, with a particular focus on China.

People get more accustomed to dealing with friends and friends of friends as their networks become more closed and it is easy to imagine that they tend to be suspicious if asked to cooperate with a stranger. Even when they are not sociologically aware of their network, within group trust can lead them to selective exclusion and, potentially, distrust of those on the outside. Thus, Professors Burt and Opper revealed that network is a forcing factor for cooperation in their recent study “Cooperation Beyond the Network”, forthcoming in Organization Science. 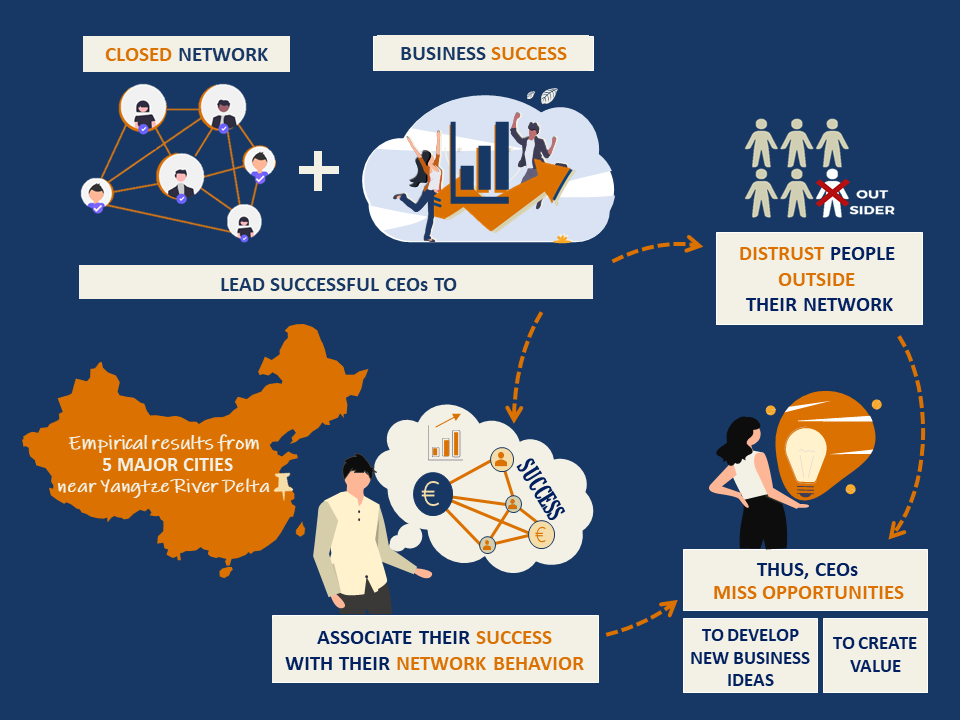 “As a person’s network becomes more closed, with fewer contacts more strongly interconnected, the distinction between inside and outside becomes more sharply defined. In particular, we expect people successful in closed networks to feel reinforced in their distinction between insiders and outsiders. Whatever the reason for success, people will assume credit for the success, associating it with their network behavior,” Professor Burt noted. “Sometimes people may succeed by accident, but this past success will certainly make them more arrogant. We live in a world that promotes distrust - encounters with strangers, though, deserve attention as a source of novel business ideas and value creation.”

A unique dataset, built thank to Professor Opper’s extensive experience with China, allowed the authors to observe how managers in closed networks behave regarding cooperation, and empirical results strongly supported their argument. Their sample included CEOs of medium size private companies operating in five major cities in the three provinces surrounding the Yangtze River Delta: Shanghai, Changzhou, Nanjing. Wenzhou, and Hangzhou. Cooperation was measured behaviorally by having each respondent play an incentivized one-shot Prisoner’s Dilemma Game (PDG), and network data were obtained via a survey about standard network metrics.

As expected, CEOs in open networks are more likely to cooperate and those in closed networks more likely to defect (the non-cooperative behavior in a PDG). Interestingly, the negative association is strikingly inconsistent across CEOs as the hubris of success encourages more extreme network-induced behavior in whatever network a CEO has built up.

Prof. Burt suggested that managers intending to improve cooperation by enhancing group solidarity should be cautious. A person who has learned to cooperate within the emotionally secure social environment of closed networks, understands cooperation as a behavior governed by reputation among interconnected, homogeneous people. That person, so apt for certain tasks, could be inept at higher-level tasks that require cooperation between groups with distinct, even contradictory interests.