Gender Quotas Improve the Quality of the Entire Board

WHEN QUOTAS WERE INTRODUCED IN ITALY, A NEW STUDY BY PAOLA PROFETA FINDS, IMPROVEMENTS WERE RECORDED NOT ONLY IN FEMALE PRESENCE, BUT ALSO IN EDUCATION AND AGE OF BOARD MEMBERS. WITH NO COSTS IN TERMS OF FIRM PERFORMANCE AND STOCK VALUATION

The Golfo-Mosca Law, ten years ago, mandated gender-balanced representation on Italian listed companies’ boards of directors. According to a study by Paola Profeta, published in Management Science, the law reached its goals and improved the selection process not only for women but also for men, at no short-run cost in terms of firm financial performance or stock market valuation.

“We find that, when gender quotas are enforced, firms display a higher share of women directors (well above the required threshold), higher average education levels of all members of the board, and fewer older members than before the quota. Our results suggest that gender quotas change the selection process of the entire board. Despite having to select more women, we do not find an increase in female board members belonging to the firm owner’s family, nor a clear increase in the average number of positions held by each woman,” says Paola Profeta, Professor of Public Finance and Director of the AXA Research Lab on Gender Equality at Bocconi. 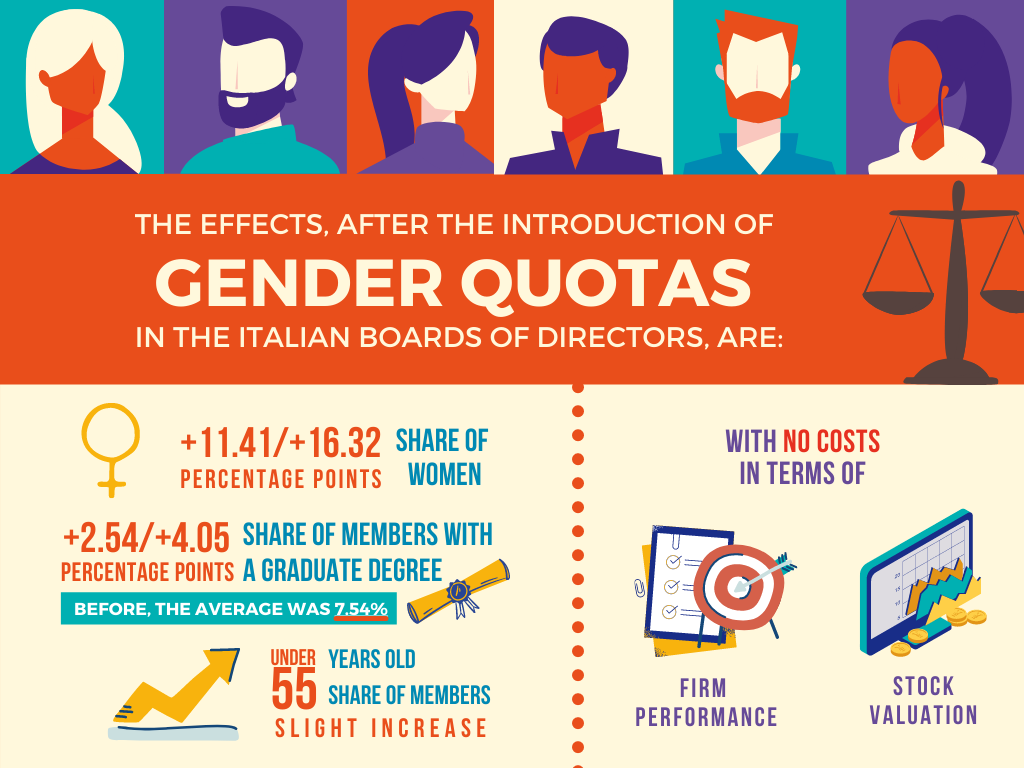 The quota law did not apply to all firms at the same time, as in Italy board elections are held every three years on a date decided by each firm. After the quota introduction, the share of women raised between 11.41 and 16.32 percentage points. The share of members with a graduate degree increased between 2.54 and 4.05 percentage points (given that the average mean of the variable before the reform was 7.54, this is a very large increase). A slight increase in the share of members less than 55 years old is also recorded. All the effects are stronger in companies with no women on the board before the reform.

When quotas were introduced, though, opponents argued that the reform could come with costly consequences. By equalizing outcomes rather than opportunities, quotas could promote less qualified individuals, who are likely to perform poorly. The study proves critics wrong.

To analyze this point, Professor Profeta and her co-authors (Giulia Ferrari, INED; Valeria Ferraro, Boston College; Chiara Pronzato, University of Turin) manually collected individual data on all members of the boards of Italian listed companies in the period 2007-2014 (4,732 unique individuals), as well as firm-level data on relevant outcomes of these companies (243 companies) and stock-market prices.

The scholars do not find any relation between the share of women directors and the measures of a company financial performance. Stock price reaction also seems to be neutral, but a negative effect of the share of women on stock volatility is spotted. “This may be interpreted as more gender-balanced boards being perceived by the market as less risky,” Prof. Profeta concludes.