COVID: An Uneven Blow to Fertility Across Developed Countries

A STUDY RECENTLY PUBLISHED IN PNAS HIGHLIGHTS HETEROGENEOUS EFFECTS ACROSS RICH COUNTRIES. WHEN SEASONALITY AND PAST TRENDS ARE TAKEN INTO ACCOUNT, ONLY SEVEN COUNTRIES OUT OF 22 RECORDED A SIGNIFICANT DECLINE, WITH THE STRONGEST EFFECTS IN ITALY, HUNGARY, SPAIN, AND PORTUGAL

At the beginning of 2020, commentators in popular press were fiercely divided between those forecasting a baby boom after the COVID-19 lockdown and those predicting a sharp fertility fall. Now, a paper published in PNAS by four Bocconi scholars (Arnstein Aaassve, Letizia Mencarini, Nicolò Cavalli, and Samuel Plach), plus Seth Sanders from Cornell University, highlights a more nuanced picture.

Newly released data on fertility rates in 22 high-income countries accounting for around one third of the COVID cases worldwide reveal large heterogeneity: once past trends are taken into account, the COVID-19 effect is significantly negative in seven countries (Italy, Hungary, Spain, Portugal, Belgium, Austria, and Singapore), negative, but not in a statistically significant way, in six countries (France, United States, Israel, Japan, Czech Republic, and Iceland), and positive, but not significant, in the remaining nine (Slovenia, South Korea, Norway, Denmark, Finland, Sweden, Germany, the Netherlands, and Switzerland). 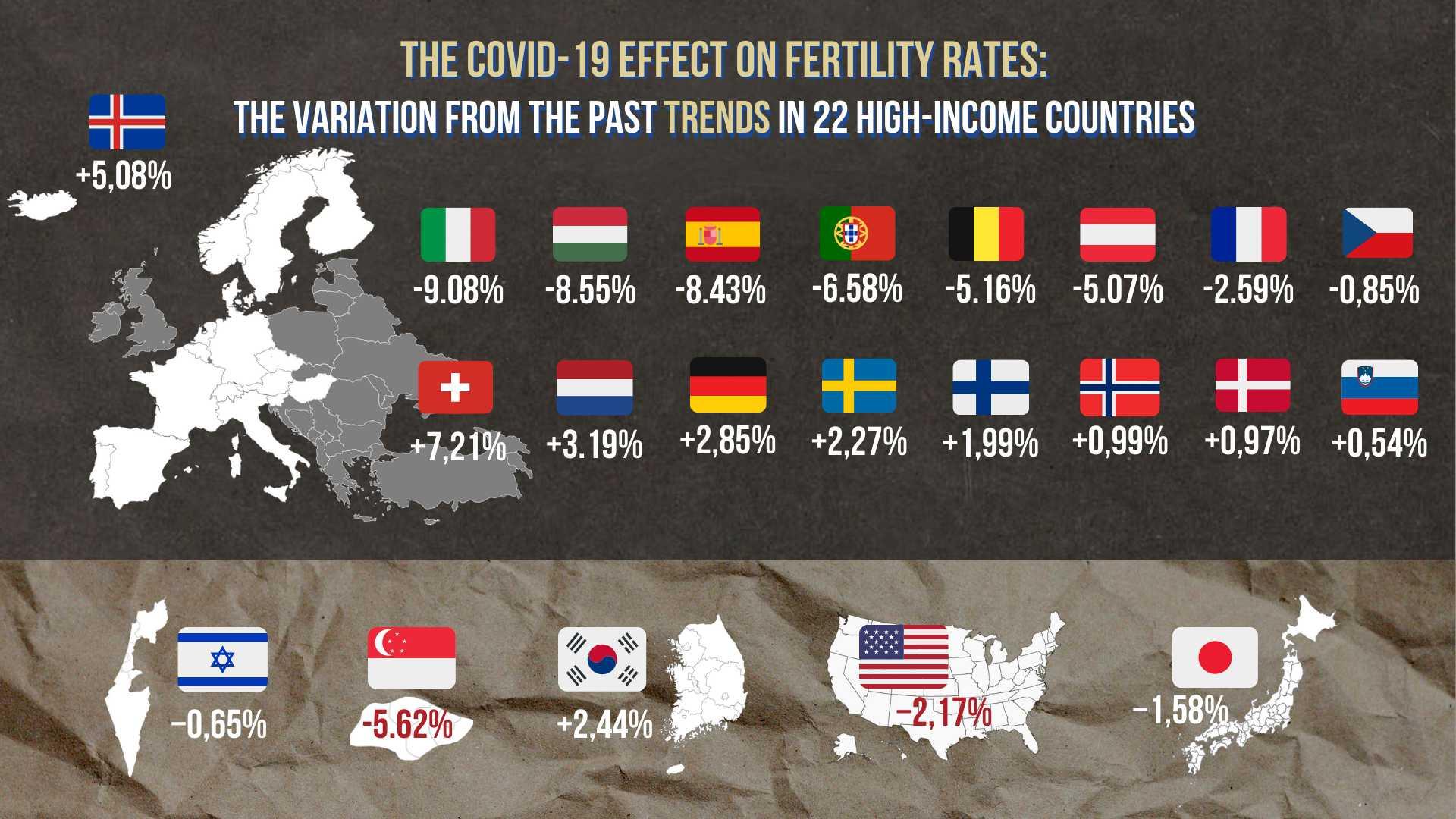 Taken at face value, fertility rates appear to be on the fall in 18 countries out of 22 (the exceptions being Denmark, Finland, Germany, and the Netherlands). “But data include confounding factors such as pre-dating trends and seasonality”, explains Professor Aassve, a demographer and lead author of the study, “and only seven countries show a significant decline beyond that predicted by past trends.”

The authors warn that “currently available data offer information on the first wave of COVID-19 and thus only a glimpse into the overall decline during the pandemic. Since birth effects start to be felt in November 2020 and we have data up to November 2020/March 2021 according to the country, we estimate conception rates during the first lockdown (up to April/June) and we cannot capture potential effects of the second and third waves.”

Data, though, provides insights into various stages of the first wave. In France and Spain , for instance, a recovery is observed in March 2021, referring to conceptions in June 2020. For these countries, June 2020 marked the point when the first wave of the pandemic subsided and might consequently reflect a rebound following postponement during the very first months of the outbreak. For other countries, such as Italy, evidence was not available when the study was written, but recent data released by the National Institute of Statistics (ISTAT) seem to highlight the same pattern.

Preliminary explanations for the heterogeneous effects of the pandemic may be provided. “The particularly strong effect in Italy may be due to the fact that it was the first Western country to be hit and the worst affected, while others had some time to brace themselves for the pandemic impact,” says Prof. Aassve. “Furthermore, countries economically reliant on tourism, such as those in Southern Europe, were harmed more than countries with more tech jobs. Finally, more effective public support policies probably spared Northern Europe the worst economic effects.”

“The heterogeneity shown by our study,” concludes Professor Mencarini, another Bocconi demographer, “confirms that reproduction in developed countries is the result of couples’ long-term planning. When people perceive the future as more uncertain, as after a shock such as the pandemic, they postpone their choices.”