AGE, OCCUPATION, RISK EXPOSURE AND INCOME ARE CONSIDERED KEY ATTRIBUTES BY THE PUBLIC EVERYWHERE IN PRIORITIZING VACCINE ALLOCATION, ACCORDING TO THE OXFORD COVID19 VACCINE PREFERENCE AND OPINION SURVEY, WITH THE PARTICIPATION OF ALESSIA MELEGARO

While approaches to lockdowns have been divisive and politicized, the public has generally consistent preferences regarding vaccination programs and these hold across political and geographic divides, a new study co-authored by Alessia Melegaro, Director of the Bocconi COVID Crisis Lab finds.

The Oxford COVID-19 Vaccine Preference and Opinion Survey (CANDOUR) Project measured the global public’s preference for vaccine allocation priorities. Eighteen scholars led by Raymond Duch (University of Oxford) have just published in PNAS the results of a conjoint experiment, in which 15,536 subjects from 13 countries made eight binary choices over hypothetical vaccine recipients who randomly varied on five attributes: occupation, age, transmission status (risk of contracting and transmitting the virus), risk of death from COVID-19, and income. 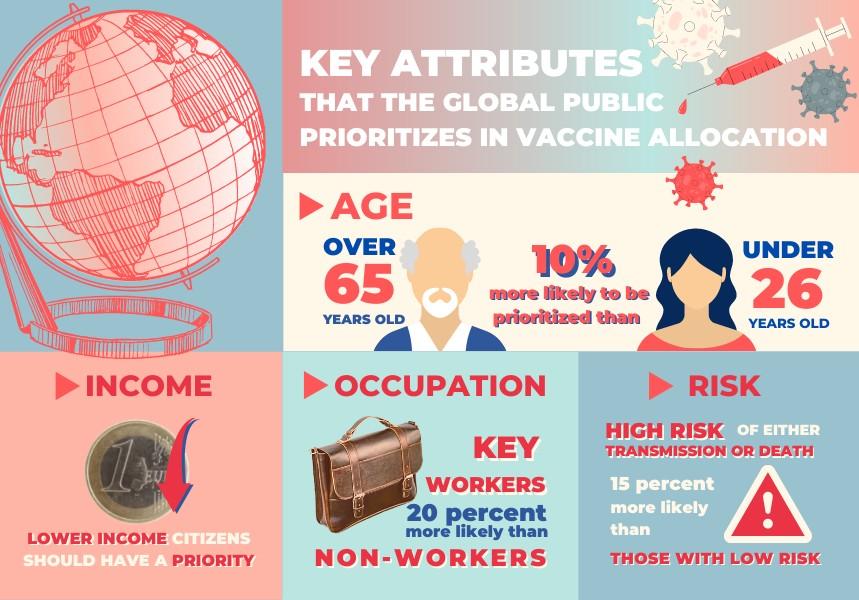 “The global public exhibits a surprising consensus on which population attributes should have priority in the COVID-19 vaccine implementation efforts,” says Professor Melegaro.

Occupation - A potential vaccine recipient employed in a key worker occupation is roughly 20 percent more likely to be selected by global respondents compared to those not working or non-key workers who can work at home.

Income – For a majority of the 13 countries, and particularly in those with higher income inequality, lower income citizens should have a priority in vaccination.

Perhaps unexpectedly, “these views are shared by those identifying with the left and the right, young and old, less and more highly educated, and richer and poorer citizens,” Prof. Melegaro says.

Among the other things investigated by the survey, a very large majority of the public believes the governments should assume the lead role in the distribution of COVID-19 vaccines. In no country the share of those who say that distribution should only be available via government schemes is below two thirds.

The only divisive issue is vaccination mandate. Even if mandating COVID- 19 vaccination commands considerable support, opinions are polarized in many countries and in one of them, France, the public is overwhelmingly opposed to mandated COVID-19 vaccination.

“Such a large consensus on most distribution issues should be taken into account in the initial roll-out of the vaccination campaign in the countries still left behind and, everywhere else, in the likely case that additional doses, potentially on an annual basis, will be required for the foreseeable future,” concludes Prof. Melegaro.