AS OF TODAY, 9,000 PHOTOS AND DIGITIZED DOCUMENTS FROM EIGHT ARCHIVAL COLLECTIONS KEPT IN THE LIBRARY ARE AVAILABLE TO EVERYONE ON THE BOCCONI WEBSITE. AN IMPORTANT RESOURCE FOR SCHOLARS OF ITALIAN ECONOMIC HISTORY FROM ALL OVER THE WORLD 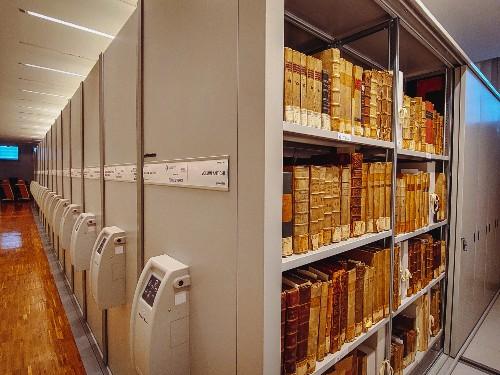 Behind a nondescript door on the first floor of the Bocconi Library, a small treasure is kept. In a metal parallelepiped, 14 meters long, 2.5 meters high and 4.5 meters deep, tens of thousands of documents belonging to the historical collections acquired over time by the University are kept under controlled temperature and humidity. Only the librarians have access to it. By moving the walls along almost invisible rails in the great rectangular metal box, they reveal high shelves full of folders containing account books, letters, meeting minutes, drawings and photographs that tell the story of the evolution of the Italian economy. The oldest documents date back to the 15th century, the most recent to the 1990s.

Until yesterday, scholars interested in exploring this priceless heritage had to consult the indexes, choose the materials they were interested in and wait for the librarians to take the documents to another small room, the consultation room, where they could analyze them. They were treated with extreme care, always under the watchful eye of library personnel.

“Today, a part of these archives, including the entire photographic heritage of more than 9,000 images, has been digitized and can be consulted online in a section of the library's website (https://asboc.unibocconi.it/?l=en),” announces the Director of Library and Archives, Beatriz Villagrasa.

About 5% of the material in the Bocconi collections is currently available in digital format. “The digitization work,” explains archivist Tiziana Dassi, “follows a trajectory dictated by the relevance of the materials for research. We have favored the documents that are of most immediate interest to the researchers, along with the photographs, which needed to be reconditioned to ensure their durability.”

The purpose of the operation is twofold. On the one hand, it greatly increases the usability of the materials, which become more easily accessible from any distance. “In the past, we have hosted scholars from as far as Taiwan,” recalls Dassi, “but such trips are not within everyone's reach.” On the other hand, digitization is a further guarantee of document preservation. 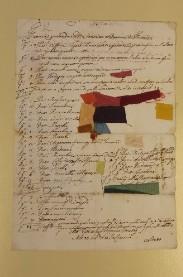 The oldest papers are those of the Archivio Saminiati-Pazzi, which contains mainly registers of Tuscan mercantile and banking companies, and commercial correspondence. The period goes from 1425 to 1760, with the rare peculiarity that in many instances, in addition to the received correspondence, also the minutes of the outgoing letters are included, thus allowing to reconstruct with precision complex economic events. Among the most interesting testimonies are the sample books of satin and taffeta that the silk merchants of the Saminiati family used to send to their agents across Europe: small fragments of period fabrics attached to the sheet that describes them.

From the end of the 18th to the beginning of the 20th century, the Archivio Artimino testifies to the management of a Medici villa and of the farm that surrounded it.


The most recent archives bear witness to the economic history of Milan between the 19th and 20th centuries and to the development of Bocconi University. The Archivio Ugo Pisa collects papers concerning the Milanese activity and the economic and social interests of this politician and diplomat. 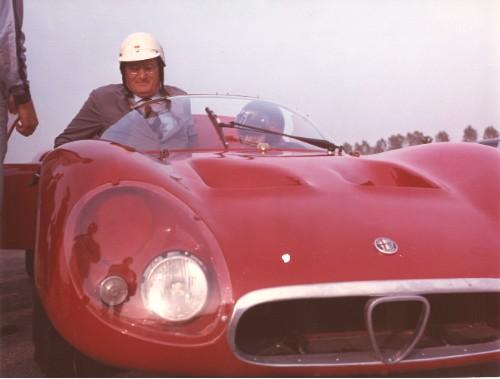 Fashion show calendars, sketches, samples, photographs, brochures and administrative documents are the contents of the Archivio Camera Nazionale della Moda Italiana. The documents date from 1958 to 1989 and have been reorganized and inventoried thanks to the efforts of a Bocconi Professor, business historian Elisabetta Merlo.

With the Archivio Brustio-La Rinascente, we come closer to themes more directly linked to Bocconi. Subsequent members of the Brustio family held prominent positions at the luxury department store La Rinascente (the former Magazzini Bocconi) from 1919 to 1980 and the fund contains the heterogeneous materials they collected. 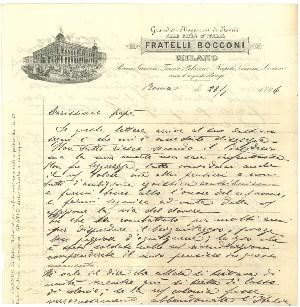 The Archivio storico Università Bocconi and the Archivio fotografico Resti (collected by Enrico Resti, general manager of the University from 1971 to 1994) contain reference materials for anyone interested in the history of the University. By randomly opening a report from 1931, one discovers that inside the University, in addition to a gym, there was a fencing hall. The Archives also contain the original - on Magazzini Bocconi letterhead - of the letter Luigi Bocconi wrote to his father Ferdinando before leaving for Africa and which the latter was to receive only if something happened to his son. “Not everything succeeds according to desire, but my death will not be fruitless,” Luigi wrote. By founding a university and dedicating it to his name, his father Ferdinando wanted to prove him right.

The archives were acquired over the course of decades, first by the Institute of Economic History, then by the Bocconi Library, almost always through donations. “There is no lack of organizations and families interested in getting in touch with us,” concludes Director Villagrasa, “because the best preservation standards are guaranteed here, both for the donors and for the Superintendence.”