THE PROPOSAL FOR A EUROPEAN DEBT AGENCY WILL BE DISCUSSED TODAY AT AN EVENT OF THE DEUTSCHE BANK CHAIR IN ASSET PRICING AND QUANTITATIVE FINANCE, HELD BY CARLO FAVERO

In the very near future, when monetary policies return to the normalcy lost in the pandemic period, care must be taken to ensure that all Eurozone countries can afford an autonomous and proactive public spending policy without the burden of unsustainable public debt costs.

Any solution will have to avoid excessive fluctuations in the sovereign debt market, provide incentives for discipline to the most indebted countries, and avoid debt mutualization that the more "virtuous" countries are not ready to accept.

The formation of a European Debt Agency (EDA) is the proposed solution to be discussed today at Bocconi (CLICK HERE for the details), at an event of Deutsche Bank Chair in Asset Pricing and Quantitative Finance, held by Carlo Favero.

The proposal, detailed in a discussion paper co-authored by Professor Favero with Massimo Amato (Bocconi), Everardo Belloni (POLIMI Graduate School of Management), Lucio Gobbi (University of Trento) and Francesco Saraceno (OFCE-Sciences Po), calls for the establishment of an agency, which will be endowed with an amount of capital equal to the current European Stability Mechanism (ESM) capital.

Such an endowment of capital (€80bln, paid by the Eurozone countries) and a pricing system that ensures the intertemporal financial equilibrium of the EDA would ensure the agency's AAA rating.

Under the proposal, when the EDA begins its operations, member states stop issuing bonds and the agency substitutes them in this role. The EDA, in turn, loans to the states an amount of money equal to the nominal value of the new bonds. The credit takes the form of perpetual loans, which the states agree to honor by paying periodic instalments to the EDA.

The bonds issued by the EDA are listed on the market; the perpetual loan is not listed. 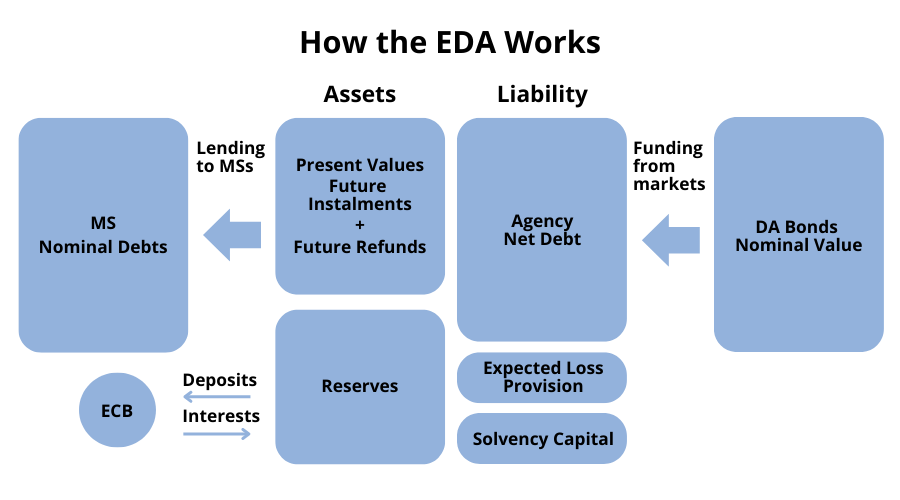 By replacing national bonds with its issues as they mature and need to be refinanced, the agency will eventually manage all euro area sovereign debt.

“By progressively raising a screen between markets and member states,” Prof. Favero said, “the EDA will eventually filter all member states’ liquidity and refinancing risk, transforming all the euro area debt into safe debt.”

Member states’ fiscal discipline is ensured by the fact that the cost of perpetual loans (and thus the amount of each instalment to be paid to the EDA) depends on the creditworthiness of the individual state, i.e., ultimately, on its riskiness and its conduct.

The difference between the rates paid by the EDA for its bonds and those charged by the agency to the states results in a constant accumulation of reserves and constitutes the pricing mechanism that secures the agency's AAA rating. It also creates a buffer that each individual state can use, in the event of a crisis, to suspend payments for a certain period.

Using a simulation, the five authors calculate that if the EDA had been established in 2002, the Greek crisis might have had different outcomes than those recorded. In 2015, at the height of the crisis, Athens' accumulated buffer would have allowed it to suspend payments for five years.

“Because it is based on the absence of debt mutualization and maintaining continued accountability of member states for their fiscal discipline,” Prof. Favero concluded, “our proposal ensures the minimization of borrowing costs for member states, the stabilization of sovereign debt markets and political acceptability across the Eurozone. Even for Germany, our simulations show a borrowing cost through EDA that is lower than actually observed average borrowing cost.”

Also participating in the Oct. 17 event will be Veronica Guerrieri (Chicago Booth) and Guido Lorenzoni (Northwestern), co-authors (with Bocconi's Francesco Giavazzi and Elysée economic adviser Charles-Henri Weymuller) of a proposal to transfer the portion of national debt accumulated during the pandemic from the European Central Bank's balance sheet to a European Debt Management Agency.