Thinking Critically in a World of Fake News and Social Media

IN A WORLD OF HYPERCOMMUNICATION, LEARNING TO THINK CRITICALLY IS FUNDAMENTAL TODAY FOR ANYONE WISHING TO MAKE THOUGHTFUL CHOICES. AN EXCERPT FROM THE BOOK CRITICAL THINKING, BY CANALE, TUZET, CIUNI, AND FRIGERIO

In today's fast-paced world of hyper-communication, fake news and biases in social media surround us every day. The overloading of information weakens the ability to judge and increases the risk of entertaining false beliefs and biased opinions. In the book, Critical Thinking, Damiano Canale and Giovanni Tuzet, Full Professors of Philosophy of Law at Bocconi University, together with, Roberto Ciuni (University of Roma Tre) and Aldo Frigerio (Catholic University of Milan), introduce the discipline of critical thinking, which provides the means to distinguish good from bad arguments. The volume also clarifies why it is important to think well. Recognizing and providing good arguments helps us have a better understanding of the issues we face when making choices and interacting with others. Bocconi Knowledge publishes an excerpt from the book, courtesy of the authors and the publisher, Egea. 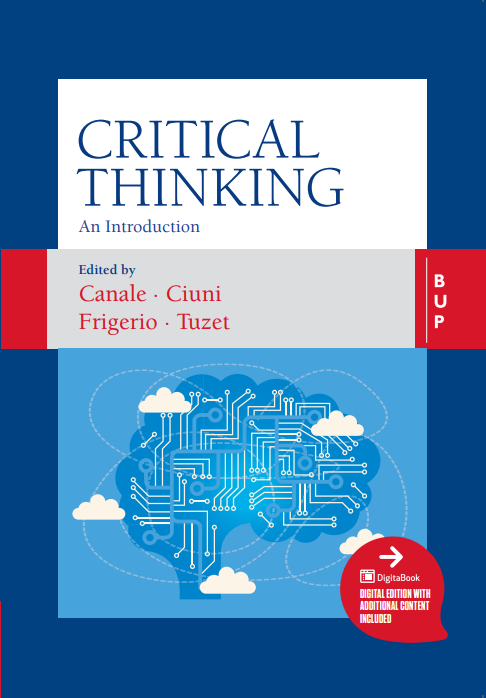 In ancient Greece, the term “kriticós” pointed at the ability to judge and discern things, in order to make the best choices for us and for others. This ability looks in trouble today. In the world of hyper-communication, monopolized by social media, it happens that our ability to judge the opinions of others, to tell apart truth from falsity, to distinguish good reasons and bad reasons in support of a choice, is weakened to the point of almost disappearing. The causes of this are well known. The inflation of information showering us every day makes it very hard to tell apart what is reliable and relevant from what is not. This phenomenon is made just worse by the proliferation of fake news, that is to say by the deliberate dissemination of false information that leverage widespread prejudices and our fears, thus managing to attract the attention of the public. In addition, today any exchange of views, both on social media and in public discussion, tends to turn into a relentless struggle, in which the insult, the denigration of the opponent, or the ridiculing of the opinion of others, often take the place of critical discussion about the reasons supporting a certain thesis. All this drastically reduces not just the quality of public debate and collective choices, but also our ability to express a well-considered judgment on issues that are often very relevant to our lives.

It is no coincidence, therefore, that today the graduation programs of many of the most important Universities in the world include a Critical Thinking course: it aims at sharpening the students’ ability to adequately justify a thesis, to refute the theses of others, to identify mistakes in reasoning, and to evaluate the reasons in support of a certain assertion. This applies both to everyday discourse and scientific inquiry.

The goal in question can only be achieved, however, by adopting an interdisciplinary approach. There is a vast spectrum of disciplines from which one can draw in this respect: logic, probability theory, statistics, decision theory, and again the theory of argumentation and the theory of rational discussion, as well as disciplines which study language, first of all pragmatics. An important contribution to a full awareness of the problems and skills that come into play in Critical Thinking is also provided by cognitive psychology, and in particular the psychology of reasoning and the psychology of decisions. The ability to produce and evaluate arguments, in fact, depend not just on the rules that govern rational discussion, but also on our ability to guard against cognitive biases that systematically lead us into error in making a choice or in providing a solution to a problem. More in general, the ability in question depends on our ability to avoid fallacies, that is, patterns of reasoning that don’t work, and yet we tend to follow them for some reason. These mistakes are due to how we real cognitive agents are made - to our difficulties in using some reasoning patterns; or to the fact that the cognitive fatigue that we would do in following correct reasoning procedures leads us to adopt “shortcuts” that can lead us to wrong conclusions.

An important point of Critical Thinking is that, in teaching us to evaluate an argument, it does not take as a criterion the way in which we actually tend to think. Instead, it assumes a set of normative standards by which we must reason, if we want to be rational, as is desirable. The Critical Thinking approach in fact considers reasoning from a normative point of view, not from a descriptive one. It is worth noticing that we ourselves recognize the normative prescriptions on reasoning as rational once we are told where our mistakes are, as shown by the literature on biases. In any case, a normative approach to reasoning can only really be illuminating if we are aware of how we actually reason. Thanks to cognitive psychology today we can attain this (at least, to a much greater degree than in the past).

Being aware of the various aspects that condition the reliability of the judgments in which each field of knowledge is divided helps students take the first steps in their studies with greater confidence, as well as to acquire the critical and anti-dogmatic spirit that distinguishes a good university education. Not only. Learning to think critically is fundamental today for anyone wishing to make thoughtful choices in the field of public life, avoiding the temptation to believe that the opinion of those who shout the loudest, or receive the most likes, is necessarily the best opinion. In this sense, the path proposed in this book is aimed not only at university students, but at anyone who has the desire to learn to think better and discover the weaknesses of other people’s reasoning.