COORDINATION AND TACTICAL INFORMATION, NOT PROPAGANDA, ARE THE KEY OF BBC RADIO INFLUENCE ON THE CONFLICT BETWEEN THE FASCIST REGIME AND OPPOSITION PARTISANS IN WWII ITALY, ACCORDING TO RESEARCH BY GUIDO TABELLINI AND COLLEAGUES. WHEN SUNSPOTS IMPAIRED THE BBC SIGNAL, PARTISAN ACTIVITY AND REGIME RETALIATION WOULD DECREASE

When World War II was nearing its end and parts of Italy were still under Nazi occupation, a few thousand Italian resistance fighters in 1943 rose against the fascists. Their number soon grew to around 200,000 and during the civil war, over 75,000 Italians lost their lives before the Germans surrendered in May 1945. With such organically formed groups of committed partisans, coordination rather than participation posed a challenge.

In a recent publication in the American Economic Journal: Applied Economics, Guido Tabellini, Intesa Sanpaolo Chair in Political Economics at Bocconi, and co-authors show how BBC radio helped coordinate partisan activities. They found that a 10% increase in BBC's signal strength increased the number of violent Nazi-fascist responses to civilian and partisan resistance by more than 2.5 times compared to the monthly average. Further, they established that the BBC did so by providing tactical information that was crucial for coordination. 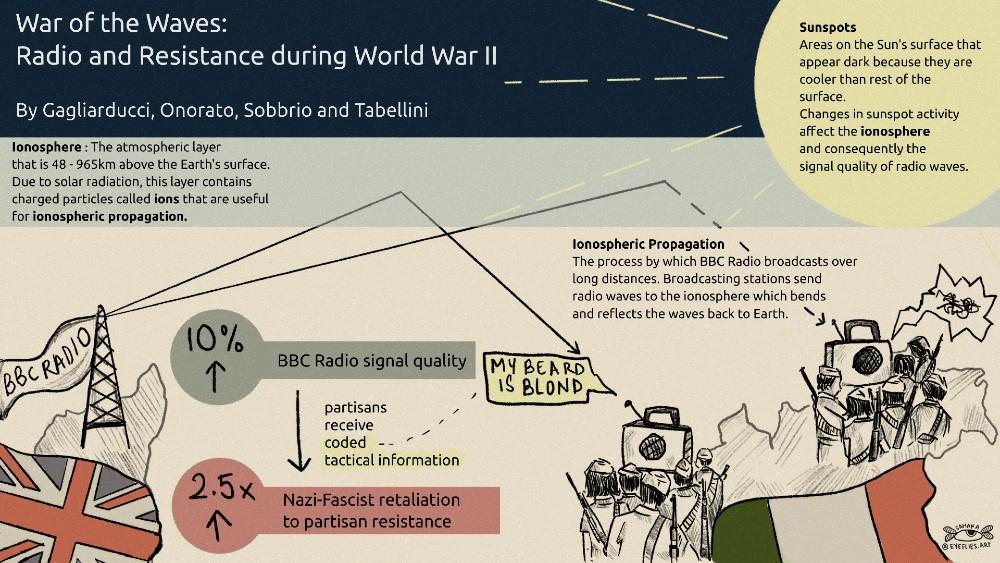 Its historical milieu does not restrict the importance of their findings. As Professor Tabellini notes, “Irrespective of the type of media, communication and coordination remains a challenge even today for resistance movements.” Thus, their careful investigation of not just the effect but also the mechanism offers important generalizable insights.

It is difficult to quantify the BBC's role in the intensity of partisan activities due to the absence of historical data on monthly BBC listenership and various geographical and seasonal factors impacting both the broadcast and the conflict. The authors addressed these issues by using a novel source: sunspots; the dark, cold spots on the sun's surface that impact the Earth's atmosphere. BBC used “ionospheric propagation” to transmit radio signals from the UK to Italy. By bouncing radio signals onto the ionosphere, the same layer of the Earth's atmosphere that sunspots affect, BBC could transmit signals across long distances. Crucially, sunspots have a detrimental effect on signal strength, but are otherwise wholly unrelated to the intensity of conflict.

By accounting for the prevailing environmental conditions in Northern Italian municipalities for every month between October 1943 and May 1945, the authors could isolate the influence of BBC signal strength (measured by variations in sunspot activity) on episodes of Nazi retaliations to resistance. While past research focused on propaganda, the authors found that this wasn't the primary mechanism behind their results. Cryptic messages like “my beard is blond” held critical information on the location and timing of Allied bombings, air-drops, and movements of ground troops. For motivated partisan brigades, it was this information that mattered most compared to propaganda or persuasion.

An argument that pinned down the mechanism for Prof. Tabellini was the observation that BBC signal strength months before episodes of retaliation did not affect their intensity. Suppose it were true that the BBC motivated partisan activity. In that case, signal quality from previous months should have had an influence. Instead, they found that effects were the strongest right before a clash, implying that the BBC mainly helped coordinate by providing timely information.

For Prof. Tabellini, the more general lesson from this careful historical analysis is that “resistance to regimes can be made more effective and facilitated by media not just through motivating consensus in public opinion but also through the provision of key information necessary for coordination”.