IN 2016 AN ABRUPT SWITCH FROM SAFE ASSETS TO HIGH TECH INVESTMENTS HAS BEEN RECORDED IN THE 39.9 BLN DOLLARS INDUSTRY, ACCORDING TO THE SIL REPORT PRESENTED TODAY, AS INVESTMENT VALUE HITS A TEN YEAR LOW

2016 has not been a business-as-usual year for Sovereign Wealth Funds (SWFs), according to the Sovereign Wealth Fund Report 2016, presented today by Sovereign Investment Lab (SIL, part of Bocconi’s Baffi Carefin Center) in a closed-doors event. SWFs reacted to low commodities prices and heightened political uncertainty by reducing their investments to a ten-year low and by abruptly switching from safe assets to risky, mainly IT investments, following the footsteps of venture capitalists and inducing the SIL scholars to title their 2016 Report Hunting Unicorns.

The 21 SWFs monitored by SIL completed 158 deals in 2016 (-14%) for a total publicly reported value of $39.9 bln (-16%), reaching the lowest level since 2006. The industry seems, though, to have already bounced. “With the sand of political uncertainty settling and global growth on the rise”, says SIL Director, Bernardo Bortolotti, “2017 promises to be an exciting year”.

Deals and investment value  since 2000

Some excitement has, however, come also in 2016, with SWFs replacing safe assets (including real estate, hotels and tourism facilities, infrastructure and utilities) with IT-linked investments. With 31 deals worth $13.4 bln, high-tech investments represented 19% of the number of deals and 33% of investment value. In 2016 SWFs invested in the sector more than they did in the last 10 years combined. “The bets that SWFs have taken in this sector is astonishing”, Prof. Bortolotti says, “and the latest announcements suggest that the game has just started. Whether they will succeed or fail will depend largely on their execution capabilities to source the right deals, and in-source the right talent. In their hunt for unicorns, SWFs will have to take a stance towards sophisticated and nimble investors, such as venture capitalists, who have dominated this space up to now”. 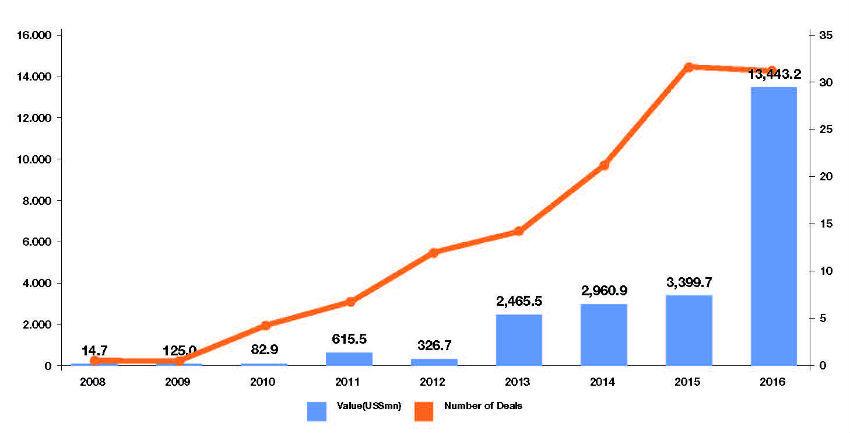 After a couple of years of decreasing investments, in 2016, the USA made a big comeback and once again emerged as a safe haven amid global chaos. With $14.9 billion worth of SWF investments, it was by far the most attractive market in 2016. Europe recorded one of the worst years in the last decade attracting only $7.2 billion worth of investments.

Today’s presentation was also attended by the 17 participants to SDA Bocconi School of Management’s Sovereign Investment Academy, coming from SWFs of three continents, including representatives of Iran, Saudi Arabia and Palestine. Designed in collaboration with the International Forum of Sovereign Wealth Funds, the Academy “provides targeted, specialized and innovative training and education, which is currently not available in traditional executive programs”, says Prof. Bortolotti, who’s also Director of the Academy.

Go to the Videos page >

All Seminars
In accordance with Directive 2009/136/CE, we inform you that our website uses cookies. If you continue navigating on the site, please expressly accept the uses of these cookies.X