In order to reduce uncertainty about future expected returns, banks concentrate their analytical resources on the assets of some countries, and invest overwhelmingly in those same assets, explain Filippo De Marco (Assistant Professor of Finance at Bocconi), Marco Macchiavelli (Federal Reserve Board), and Rosen Valchev (Boston College) in their “Beyond Home Bias: International Portfolio Holdings and Information Heterogeneity,” published online in the Review of Financial Studies. 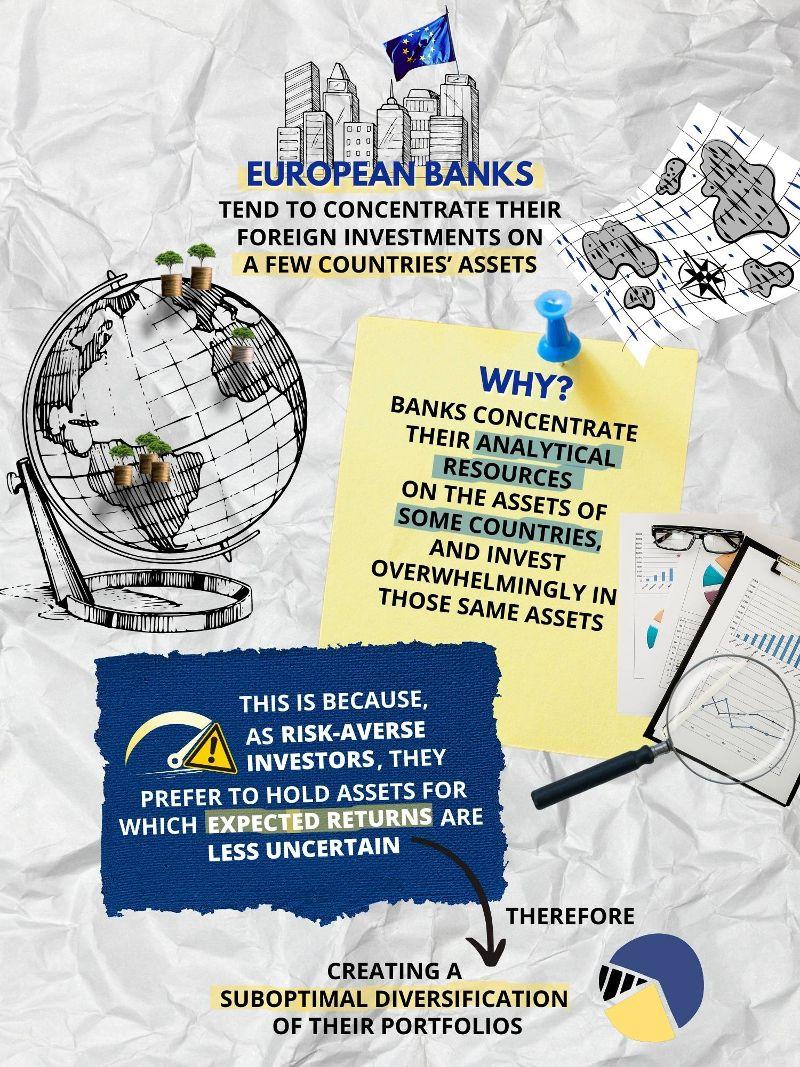 The paper tries to solve the matter of suboptimal diversification of European banks portfolios. However, rather than dealing with the well-known home bias (banks being overweighted in assets of their home country), the authors look at the “foreign bias”, observing that banks tend to specialize their information production on the assets of some countries. They then invest in those countries’ assets relatively more than optimal allocation theory would suggest.

In order to measure differences in the specialization of information production by banks, the authors use data from the Consensus Economics survey, which collected 3-month-ahead forecasts of 10-year sovereign yields from the same banks’ research departments. When confronted with the realized yields, forecasts exhibit considerable dispersion at the bank level. This means that each bank tends to make relatively accurate forecasts for some, and not all, countries’ yields. Moreover, this precision is consistent over time, suggesting that it is the result of different choices among banks in the allocation of analytical resources when gathering info about specific countries’ yields.

The most important result of the empirical part of the paper is that banks tend to hold more assets of countries for which their forecasts (ex-post) are more precise. This means that banks tend to prefer investing in assets (the paper uses sovereign bonds as a proxy, but the results can be generalized to other assets) that they know better. This is because risk-averse investors prefer to hold assets for which expected returns are less uncertain.

The second part of the paper builds a theoretical model that explains the results of the empirical analysis. The key innovation of the model is found in its description of uncertainty. The authors break uncertainty (about yields in this case) into two components. The first component can be “learned upon” through research. The second component, instead, is “unlearnable”. As investors research an asset (employing resources for its analysis, for example), they decrease the uncertainty about its payoff. But the model predicts a threshold (which is asset-specific) for which investors do not find it optimal to invest in research, as most of the uncertainty that is left is of the unlearnable kind. This explains the behavior observed in the data: banks research a country until it is not optimal to research it further and then move on to another one, in a cascading fashion, until resources available for analysis are exhausted.

“Our study can help both research and policymaking by investigating the dynamics that drive diversification of banks’ portfolios” says Prof. De Marco “also when dealing with the issueof retrenchment (investors fleeing to home assets) that is observed during financial crises.” The model can be generalized to other types of assets, too “like currency exchange rates, for example, which have been historically hard to forecast accurately.”