IN THE PAST CENTURY, A QUIET REVOLUTION BROUGHT WOMEN TO A NEW, MORE PROMINENT ROLE IN THE ECONOMY AND SOCIETY. IN HER NEW BOOK, PAOLA PROFETA, DIRECTOR OF THE AXA GENDER EQUALITY LAB AT BOCCONI, ANALYZES THE ROLE OF PUBLIC POLICIES IN REDUCING THE GENDER GAP. READ AN EXCERPT

Despite formal UN and European Commission commitments to improving gender imbalances, progress towards gender equality in wealth and pay has progressed at a discouragingly slow pace in recent decades. European countries have been proactive in their support for corrective policies such as family leave and gender quotas for corporate boards, yet measuring the effectiveness of these policies has proven difficult. In her new book (Gender Equality and Public Policy. Measuring Progress in Europe, Cambridge University Press, 2020),  Paola Profeta, Director of the AXA Gender Equality Lab at Bocconi, offers a close comparative analysis of gender-targeted policies in Europe, providing an in-depth overview of how public policy is shaping gender equality and how the presence of women in the economy and decision-making positions is itself shaping public policy. Professor Profeta bases her analysis on new data and an innovative interdisciplinary perspective for understanding the relationship between gender, equality and public policy and their impact on the European economy and society, with lessons that resonate beyond Europe. Courtesy of the author and of Cambridge University Press, Bocconi Knowledge publishes an excerpt of the book 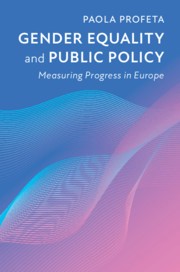 Public policy is advocated as a tool for accelerating progress towards gender equality. It includes childcare; maternity, paternity and parental leave; fiscal policies; affirmative action and gender quotas; labour market interventions; pension design; and flexible work arrangements (agile working, i.e. flexibility of time and space). In a continuously changing context, public policies are under pressure: they reflect the change in women’s roles and their increasing empowerment and leadership in the decision-making process, and they face the challenge of redesigning adequate and sustainable institutions to address these major changes. The role of public policy in connection with gender equality is an intense and dominant topic, particularly for European countries and in the European agenda. A crucial issue when addressing the role of public policies in connection with gender equality is whether gender gaps depend on nature – they have biological roots; on nurture – they are the outcomes of environmental influences or on both. If gender gaps depend on biological differences, then it is difficult to imagine how policies can play a relevant role in reducing them. If, instead, as many studies suggest, the cultural and societal contexts in which economic agents make their choices also matter, then institutions can play a more fundamental role.

On the other hand, women as economic agents may themselves have an impact on policies: this is the ‘political economy’ side of the relationship. A clear example is municipalities that randomly happen to be led by female mayors, who spend more resources on public policies (e.g. childcare) that contribute to reducing gender gaps. We expect the changing role of women in families and societies and their higher representation in decision-making positions to contribute to focusing and redirecting the policy agenda towards items that better correspond to women’s needs or preferences  with the final goal of reducing gender gaps.

Although several contributions to the literature of different disciplines, ranging from economics to sociology, political science, public policy and management, help describe the complex nature and main elements of the twofold relationship between gender and public policy, it has not been at the centre of research on gender thus far. The two sides of the relationship between gender equality and public policy have mostly been investigated separately. Their interactions and feedback effects have remained mainly unidentified. However, both public and political elements are at work in the gender and public policy relationship, and they both play an important role in the dynamic process of gender equality.

The public economics side of the relationship, that is, how public policies affect or reduce gender gaps, is present in the labour and public economics literature. Cross-country regressions are used to show that policies such as childcare, maternity leave, taxation design and labour market measures are related to gender equality. Micro-level analyses provide more careful assessments of the relationship, but they must limit their focus to a specific policy in a specific country. A major challenge for these analyses is to incorporate the role of policies into contexts in which cultural and historical determinants are a crucial component of gender gaps and their persistence.

The political economy side of the relationship, moving from gender equality and women’s empowerment to public policies, is less investigated than the public economics side, though research in this area is increasing. Traditionally, research attempting to assess the causal role of women in setting the policy agenda and the consequent effects on economic outcomes has been concentrated on developing countries. For high-income countries, the political economy side of the relationship consists of scant and inconclusive evidence. Among others, Funk and Gathman (2015) find that women in Switzerland invest more in health and environmental issues, while Ferreira and Gyourko (2014) find no effects of the gender of local US politicians on the allocation of public expenditures. In parallel, gender equality matters in the business context: the presence of women in decision-making positions in firms may influence the firms’ outcomes, such as profits, returns on equity and investment, assets, sustainability scores, international results such as openness to exports or international trade, and labour market policies such as recruiting and promotion.