The Identikit of (Shakier than You Thought) Firms Connected to Mafia

More than one business in ten is connected to organized crime in Lombardy according to a new study based on Internal Intelligence and Security (AISI) data. Contrary to received wisdom, such connections harm a firm’s financial results and increase by 25.5% its likelihood to go bust. 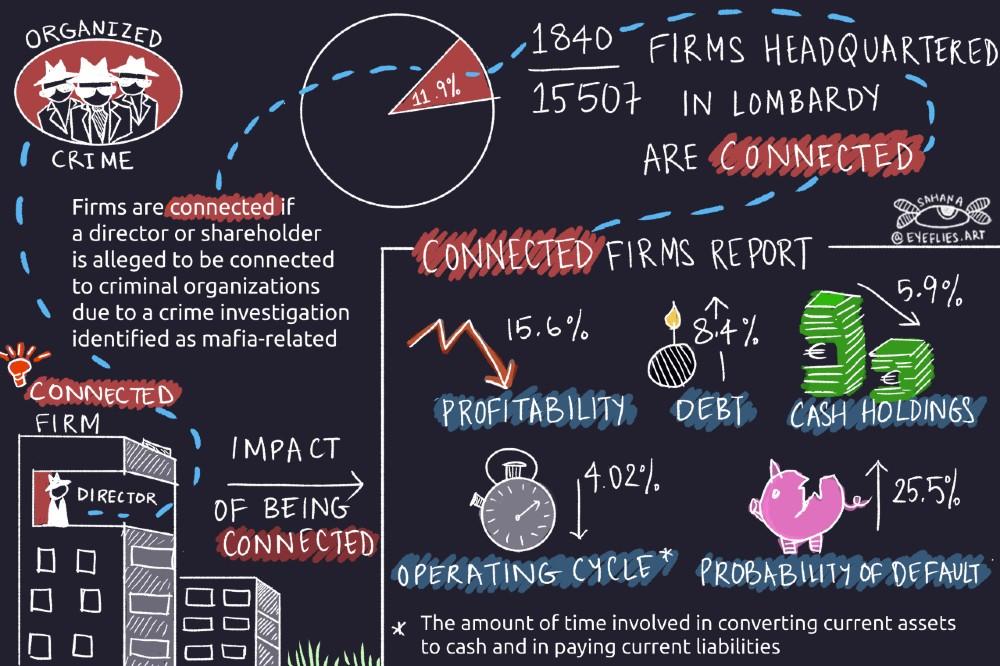 Lombardy, the Northern Italian region around Milan, is not one of the regions where organized crime traditionally emerged. However, it accounts for 25% of the Italian GDP and it has recently become a central target of organized crime’s economic activities.

With this data, they provide the first large-scale evidence of the effects of mafia connections on company performance and show that contrary to popular belief, such connections drain firm resources. As the authors noted in an interview, “if the unintentional effect of the literature on the Mafia entrepreneurship has been to create a sort of mystique around the concept of the criminal businessmen, our results are definitely against such a mystique.”

Notably, they find that while connected firms may report higher sales and have lower labor costs, they exhibit 15.6% lower return on assets than unconnected firms. The authors attribute this surprisingly lower profitability to money laundering, where funds are moved in and out of cash-intensive businesses and among company headquarters in different jurisdictions, to make the funds' criminal origins harder to trace. This can be done through false invoices which inflate costs, thus lowering profitability.

They also find that connected firms have 8.4% higher levels of debt. The firms suspiciously used more bank loans at far lower interest rates despite being less profitable, indicating the presence of fictitious loans. And with 5.9% lower cash holdings, these firms face liquidity constraints due to their resource-draining criminal connections. Being connected also allows firms to sell their inventory faster through coercion, bribery, and converting their sales to cash. Quantitatively this implies a 4.02% shorter operating cycle (ie. firms convert current assets to cash and pay current liabilities faster). Strikingly, being connected increases the firm's probability of default - filing for bankruptcy, insolvency or liquidation - by 25.5%.

The authors validate their findings by using a 2011 amendment to Italy’s Anti-Money Laundering regulation, which lowered the limit for cash-based transactions and improved auditing. Limitations on cash transactions and ability to use false invoices made connected firms more similar to their unconnected counterparts in terms of sale revenues and costs of goods sold, thus corroborating their findings on the negative effects of Mafia connections.

These results come at a timely manner. As the authors point out, “in the next few years EU’s long-term budget together with the Next Generation EU recovery instrument will be the largest stimulus package ever financed by the EU to rebuild a post-COVID 19 Europe. The EU Recovery plan will – most probably - attract the attention of Mafia organizations, which might be willing to misappropriate part of these funds through their illegal activities”. Understanding how Mafia organizations infiltrate and harm legal firms becomes crucial to design and implement effective policies.